Saving for the Future

The benefits of a pension scheme for self-employed partners far outweigh the complexity of the pension rules, according to Howard Hackney.

I am a massive advocate of pensions for the self-employed. However, I frequently come across partners in law firms who are reluctant to commit to pension planning for a variety of reasons. Those reasons usually focus on having to wait until the age of 55 to access the funds, the complexity of pensions and the fact that the individual does not have the funds to make contributions.

While these are all valid excuses, I can demonstrate that the self-employed partner or director in a law firm should give pensions serious consideration – it’s not as boring as you may think. My comments in this article relate to what are known as ‘money purchase’ or ‘defined contribution’ schemes where the benefits on retirement are linked to the value that the pot has grown to. They do not relate to defined benefit schemes, which is an entirely different subject.

While I know certain independent financial advisers (IFA) might take issue with my view, I believe the use of self-administered pension arrangements for the self-employed are almost a ‘no brainer’. This is due to the fact that contributions are tax deductible at the individual’s highest rate of tax; and any growth in the fund is then free of income and capital gains tax. It is also free of inheritance tax until age 75. In the vast majority of cases, they are also ringfenced and secure from any commercial claim against the individual.

However, I do think it is important that the scheme is genuinely self-administered by an independent ‘pensioneer trustee’ – of which there are increasingly few around. Such providers are often actuaries and provide the flexibility, degree of influence and advice that is usually required by a typical self-employed lawyer, as opposed to the approach that tends to be adopted by the retail providers.

The rules associated with pensions are desperately complex, but this is only a function of the significant benefits they provide. They should not be seen as a hindrance.

The first decision to take is what type of vehicle to use – either a self-invested personal pension (SIPP) or a small self-administered scheme (SSAS). A SIPP is the more usual route given it is personal to an individual, while an SSAS can only be set up if a limited company is involved. They are both virtually the same, albeit that they are subject to different regulations.

The main differences between the two are:

Both vehicles can borrow up to 50 per cent of the value of the fund, for example, to purchase property – perhaps one of their biggest benefits. In addition to the prime tax benefits mentioned above, there is also the availability of taking the 25 per cent tax free lump sum when drawing benefits after reaching the age of 55. Of course, this has to be balanced against the fact that when drawing the rest of the fund this will be taxed at the beneficiary’s marginal tax rate.

Some would argue that individual savings accounts (ISAs) are a realistic alternative. Certainly, in this respect they should not be overlooked, given that £20,000 per annum can be contributed to them – but space does not allow a proper comparison to be considered here.

It is then necessary to consider what contributions can be paid in any one year, as it is possible to bring forward any unutilised relief from the three previous years. So potentially, a maximum of £160,000 could be paid in one tax year. As ever, there are some added complexities; and commercially it makes sense to only pay contributions which obtain tax relief at the highest rate, so it may be sensible to pay such large contributions over more than one tax year.

Finally, there is the lifetime allowance to consider. For the tax year 2020-2021 this stands at £1,073,100 (this will be indexed in future). Higher limits have applied in the past, but these will not apply if contributions have continued to be made to the scheme. Any amounts in excess of this lifetime allowance is taxed at the rate of 55 per cent at the point of drawing. Having established what can be contributed, there is then the question of what the fund can be invested in. This is where self-administered arrangements come into their own. They are far more flexible than the more traditional arrangement and allow a much greater degree of influence over the investments. The whole traditional range of stocks and shares, including options, are allowed. However, an absolute prohibition applies to residential property and, unfortunately, what I term as ‘exotics’ such as cars, wine and stamps. Further, things which are defined as ‘tangible
movable property’ are not allowed.

On the plus side, perhaps the most exciting opportunity for investing the fund is for the purchase of commercial property – particularly, property used by the partner’s own firm (see Fig 1).

This can provide a number of benefits, including:

● The effective purchase of premises at a 40 to 45 per cent discount.
● Tax free rental returns of between 5 and 10 per cent.
● Tax free growth.
● Potential release of funds to the partner if the property is already owned.

Here is a practical example of how a property valued at £500,000 can be purchased through a combination of a cash sum of £96,000 plus a transfer of an existing pension arrangement of £174,000. It assumes that 50 per cent of the fund value is borrowed by the fund. It would not be unusual for the partner (or partners) to already own this property. If that’s the case, this arrangement effectively releases cash to them of £404,000 to do with as they wish.

Furthermore, it is not at all unusual for a group of partners to enter into these arrangements through a series of individual SIPPs, or indeed a single SSAS if the practice operates as a limited company. However, where there is a series of SIPPs care must be taken to consider the exit route and to have an agreement between each of the SIPPs as to what will happen on the retirement of an individual partner from the partnership. I favour double option agreements where either the partner’s SIPP or the other SIPPs can each force a sale on the retirement of the partner through the exercise of the options. However, if neither option is exercised then the ownership of the property continues. Of course, the transaction must be entirely at arms’ length with open market professional valuations of the property; and the partnership must pay open market rent to the pension scheme. Such rent is tax allowable to the partnership but tax free in the hands of the pension scheme. 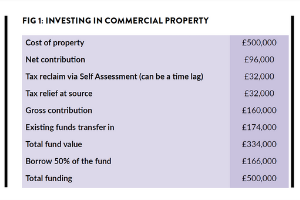 Drawing on the fund

If there are a number of pension pots, it is usual – if they are of sufficient value – to transfer them into one self-administered arrangement to access flexibility. But a word of caution here: in some old style retirement annuity pensions (RAPs), valuable guaranteed annuity rates will be lost, so check this before transferring. The fund can be drawn upon at any time from the age of 55. As there is no longer a requirement to purchase an annuity in the open market, it is usual for the SIPP to enter into what is referred to as ‘flexi access drawdown’. The first 25 per cent of the fund is tax free, but anything after that is taxed at the individual’s marginal rate of tax.

There is total flexibility over the amount that can be drawn and the split between the tax free lump sum and taxable income. Amounts that are not drawn upon remain invested and are free of inheritance tax (IHT) in the event of death before the age of 75. If death occurs on or after the age of 75 then the beneficiaries will pay income tax at their own marginal rate on the amounts they personally withdraw. The very nature of the flexibility and the IHT benefits available means that great care needs to be taken in devising an appropriate drawdown strategy. First, there is a trend – where there are sufficient other assets or other income – for the fund not to be drawn upon and retained as an IHT-free fund for future generations.

However, if funds need to be drawn, there are broadly three options available:

● Purchase an annuity in the market, though this is now highly unusual given the exceptionally low level of annuity rates.
● Draw upon the 25 per cent tax free lump sum in phases until exhausted, then draw on the rest of the fund, which will then be subject to income tax.
● Draw on a mix of the tax-free lump sum and the rest of the taxable fund.

It is a complex decision, but it is worth noting that the second option is the more usual because of the flexibility it provides and the interplay of tax rates. As the chancellor’s autumn statement approaches, the perennial rumours that tax relief will be reduced are now circulating. However, with the need to balance the books as a result of the financial measures introduced because of covid-19, these rumours have increased credibility. This means ‘buy now while stocks last’ may be a valid exhortation.

This article was written by Howard Hackney and was first published by Solicitors Journal in October 2020.