Employee Ownership Trusts – a “friendly“ buyer for your law firm

“Not as much as you think” is the often-heard answer to the question “What is my law firm worth?”, and this was even before the issues caused by COVID. Partners wishing to realise value have often been faced with this issue coupled with the unpalatable prospect of a buyer significantly changing the ethos and culture of “their” firm. “Merger” activity has “fallen of a cliff” as a result of the uncertainties caused by the pandemic and, with declining revenues, there are bound to be casualties and “bottom fishers” seeking to take advantage. It is against this background that Employee Ownership Trusts (EOTs) are being seen as a genuine alternative exit route for viable firms seeking an exit. It is not a solution for failing firms and will take perhaps three to six months to arrange, but for those seeking an exit it is a serious alternative which will be negotiated with a “friendly” buyer capable of offering a price that may well be higher than others may be prepared to pay.

What is an EOT?

An EOT is the acceptable face and specialist version of an Employee Benefit Trust (EBT). As such, all the legislation applying to EBTs applies to EOTs. EBTs are now rarely used as they have become synonymous with unacceptable tax avoidance and subject to multiple attacks by HMRC.

EOTs have been encouraged by the Government to foster an employee ownership culture – best exemplified by John Lewis – which is seen as beneficial to society and employees alike. Hence the tax advantages. Constitutionally they are Trusts with the concomitant trustees and beneficiaries. The beneficiaries are the employees; the trustees manage and control the trust for the benefit of the beneficiaries and the settlor is akin to the original owner. In order to make the relationship between the trustees and employees manageable it is customary also to have an Employee Council elected by the employees, although somewhat strangely this does not have to be in place at the outset of the arrangements.

The principle tax benefits are that the original owner sells their interest without any capital gains tax and the employees can receive up to £3,600 per annum tax free. For this to apply more than 50% of the business needs to be owned by the EOT. Should the original owners retain a shareholding then any subsequent sales will not benefit from the CGT exemption and it is therefore usual for a sale to be for 100% of the shares – and specifically shares in a Limited Company. For firms operating as partnerships – LLPs or traditional unlimited partnerships – they will need to convert to a Limited Company as part of the process. From a regulatory point of view the SRA will have to grant approval.

How does it work?

The original owners sell their shares to the EOT at an independently determined open market value. The terms of the transaction have the panoply of provisions available in any negotiated deal, including, amongst others, deferred terms, earn outs and anti-embarrassment clauses. Deferred terms are the norm to allow for the purchase price to be paid out of future profits of the firm. It is also not unusual for part of the consideration to be funded by a bank on normal commercial terms with funds lent to the firm itself. So, the EOT will end up owning the shares in the firm and in turn with a liability to the former owners. For those familiar with MBOs, the EOT is akin to the Newco (owned by management) which acquires Oldco. This is illustrated here: 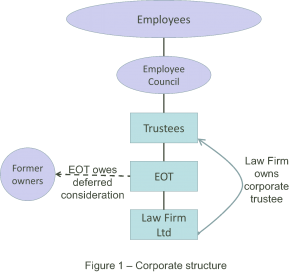 As profits are earned by the firm in ensuing years, those profits are used in a number of ways, as illustrated here: 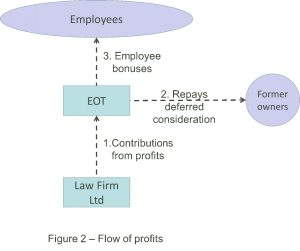 ·       To make contributions to the EOT to fund the repayment of the debt due to the former owners;

·       To make contributions to the EOT to fund payments to the employees.

What about the employees?

In order to obtain HMRC approval “all” employees must be party to the arrangements, although there can be a limited probationary period for new employees. This does not mean, however, that they all have to have equal returns from the EOT. Those returns can be – and usually are – linked to objective criteria such as salary, seniority and length of service. This would allow therefore for perhaps long serving non-equity partners who continue with the firm to have a significant share of any distributions made by the EOT to employees.

As far as the amounts received by the employees are concerned, up to £3,600 is tax free and any amounts in excess of this are subject to income tax in the normal way.

Perhaps the biggest benefit, however, is the commercial one. The company will be owned by the employees who will have a significant influence over the culture and ethos of the firm which in the vast majority of cases is to maintain the status quo. They should in turn have a greater sense of “belonging” as a result of their ownership and a congruence of aims and objective – for the benefit of all. Indeed, their jobs are less likely to be at risk than in a sale to an independent third party. The former owners (especially founders) in turn can – to a large extent – ensure the continued ethos and culture of the firm, protect their employees and create their legacy to the future.

Are there any tax issues to consider?

As in all situations like this, the tax rules are complex and the use of an EOT should not be seen as being driven by the tax benefits; it should be considered for its commercial benefits to all parties. The tax benefits have been outlined above – CGT free for the seller & £3,600 tax free p.a. per employee. It is highly advisable that the whole transaction is cleared by HMRC. In order to get approval, amongst other matters, the key issues are to meet the “all-employee” test, the “controlling interest” requirement and the “limited participation” requirement. The first two have already been discussed, but the last one relates to the number of former “participators” or owners who can be employees in the EOT. This will only usually impact on the smallest EOTs with few employees and several owners but means that non-participator employees must be equal to at least 1.5 times the number of participator employees.

During the life of the EOT distributions by the company to the EOT are not tax deductible until and unless the EOT makes payments to the employees.

The shares in the firm can of course be sold by the EOT at any stage. However, when the proceeds are distributed they will be taxed on the employees as income. This may be an issue for management who might have hoped to mount an MBO as an alternative to the EOT. However, a unique feature of EOTs is that arrangements such as Enterprise Management Incentive (EMI) can work alongside the EOT.

What is the value of the firm?

This is a perennial question asked by owners of any business let alone law firms – and can only really be determined by a sale in the open market – which of course is not what a sale to an EOT is all about. There are a variety of valuation techniques although those most appropriate for law firms will be the higher of a net asset valuation or a valuation on an earnings basis. A vital precursor is to obtain an independent professional valuation from a valuer expert in the sector. In view of the subjective nature of valuations, those providing valuations for buyers will inevitably tend to have a cautious view, while those for sellers will tend to be more optimistic. While the valuers must always be seen to be fair and independent, the choice of valuers will be in the hands of the seller.

Are there potential conflicts of interest?

There are clear potential conflicts of interest between the various parties to the transaction who are:

·       The original owners – who will be seeking maximum value and may wish to maintain the ethos of “their” firm;

·       The employees – who will seek to look after their own interests via the Employee Council and the trustees;

·       Management prior to the transaction – who may have had MBO aspirations;

·       Management after the transaction (who may or may not be the same as those prior to the transaction) – who will be rewarded both as employees of the company and as beneficiaries of the EOT;

·       The trustees – often a Corporate Trustee owned by the practice;

·       The independent valuers – appointed by the seller.

All of these should be carefully considered, managed and disclosed, with informed and documented consent.

The original owners must – to obtain tax approval – give up actual control of the practice. They can however continue in a management role but must be in a minority on the Board. They can continue to be employees so long as the limited participation requirements are met.

The trustee position is an interesting one. It is usual for the trustee to be a Corporate Trustee which is often actually owned by the practice which then has the power to appoint directors of the corporate trustee. The potential conflict is clear in this circular situation. The difficulty is however covered by the fact that the Employee Council can always remove the Corporate Trustee, so it is especially important that the Employee Council is properly constituted from the outset. It would be highly unusual for the former owners to be trustees or directors of the Corporate Trustee.

Those in management prior to the transaction may have had aspirations to mount an MBO and if thwarted in their ambitions may be resentful of the new structure. Indeed, they may be obstructive and see the “conflict issues” as an opportunity to further their own position or to challenge the independent valuation. This will need careful consideration and management, often through an EMI arrangement, allowing them to obtain a significant equity stake for no direct financial cost.

In a recent survey of EOTs by Consultants RM2 Partnership there are in the region of 300 EOTs of which 100 have fewer than 25 employees and half have fewer than 50 employees. This shows that the model is very appropriate to mid-market law firms.

There are a number of technical – constitutional, regulatory and tax – and significant conflict issues to address. These are clearly not unsurmountable and there are many benefits to owners and employees alike which make an EOT a real alternative; and indeed an opportunity.

The structure is not a solution for firms under financial pressure but certainly one to be seriously considered by viable firms seeking solutions to the succession challenges faced by many. This may often be at a value that may not otherwise be realised.

This article was written by Howard Hackney of Howard Hackney LLP and Mark Briegal of Bennett Briegal and was first published by Solicitors Journal in June 2020.